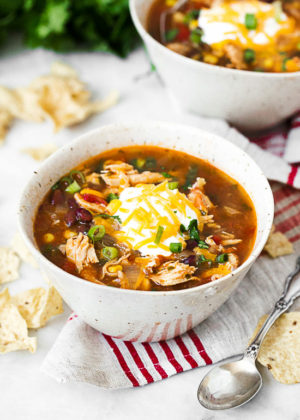 It’s finally soup weather again! This has to be my favorite way to cook – dump a bunch of healthy ingredients in my crock-pot in the morning, and then come home to an amazingly nutritious and delicious soul-warming soup that I can also fridge or freeze and easily enjoy again another night with hardly any work.

My sister sent me this week’s recipe and her notes, and I’m including both hers and mine, plus a link to the original recipe. She made hers the instant pot (pressure cooker) way, and I made a vegetarian version in my crock-pot. We both really enjoyed our versions, so let your personal likes and dislikes steer you, too.

My sister’s notes on the pressure-cooker or instant pot version:

My notes on the vegetarian crock-pot version: